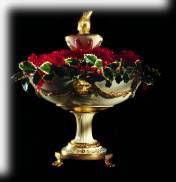 Just an observation about symbols that you must remember. Symbols serve to convey a message within the context of the dream, vision or message. The serpent that Moses lifted up on a pole in the wilderness(Numbers 21:9) served as a remedy of healing to all those bitten by the serpents. That symbol was later destroyed because it became an idol when people began to worship it. ( See 2 Kings 18:4) The Burning Bush that Moses encountered in (Exodus 3:4) served as an attention getter that the Angel used to engage Moses in conversation. The Bread and Wine that Jesus used are symbolic of His Broken Body and His shed Blood. There are many other scriptural examples of symbols that carry a message such as in parables that are important but not more important than the message or revelation that they release. So don't get focused on the symbol only but look for the message and then move pass the symbol.

Gates of hell: Satan may have access points in your life. Don't open them.

7 trumpets of Revelation:  7 great messages of the Kingdom.

Supernatural Balls or spheres: Often means completeness, well rounded plans. Supernatural orbs or spheres that people see are Angelic activity or if in an occult setting are demonic manifestations.

Walls: can be protection or walls we put up to protect ourselves from perceived danger (they can close us in or keep out danger.)

Being up in the air: (in the dream or flying) This is the observation position. Could mean You're not there yet, or just observing. However notice:  in 2 Kings 5: 25-27 - Elisha describes to his servant that he went with him (in the spirit) and saw that he had taken the gifts from Naaman. The Prophet Ezekiel also describes being taken up by the Spirit and being set down in other places, so He could see or make prophetic declarations for the Lord. Ezekiel 37:1, 2 and Ezekiel chapter 40.

Tree: the cross of Jesus, or trees with fruit on them may refer to your attributes.

Luggage: represents something valuable that you need. If you left it behind there is something back there unfinished that still needs done. If you've taken the luggage with you it's something you're going to do. Luggage can be very important.

Fountains, streams, rivers: Usually always represents the Holy Spirit unless the context reveals other meanings. For example, seeing a storm followed by a flooding river is likely something destructive sent by the enemy. Watch the context.

Clean water: revelatory truth to drink or be immersed into.

The Mt. of the Lord: where God rules from. It's His will being done from this location. The place it radiates from. Mountains in general can either be positive or negative as they represent either a strong place of spiritual authority for the Believer, or a stronghold of wickedness established by the enemy.

Jewelry: Rings are important symbols of delegated authority. Crowns represent authority to govern. Other items such as necklaces, chains, ear pieces, shoulder ornaments, badges, and customized belts usually are significant. Watch for colours and the context of the dream for the true meanings.

Honey: revelation that can be eaten or taken into the spirit within you.

Forest:  Can represent confusion, if you are lost or running through a forest that is dark and frightening. A forest could also represent a gathering of Believers that are together as community. Watch the context.

Trees:  Represents leadership or people that are fruit bearing.

Stirring up:  it's starting to happen now, not sitting but still waiting.